If you’d like to help out this holiday season to not only educate yourself, educate others but to make a difference, we ask that you drop off any non-perishable food item to any of the food trucks listed below (by following them on twitter) up through January 4, 2014. We thank you for your support and happy holidays! 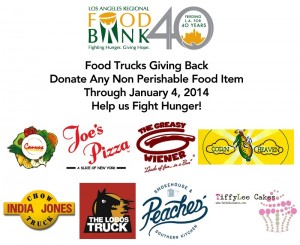 “Los Angeles residents consume more hot dogs than any other city (over 95 million), beating out Baltimore/Washington and New York.”

Imagine that Los Angeles holds the honor of being the biggest wiener loving citing in the U.S.?

Which brings us to our feature story on who may be considered a bit of an underdog (get it dog, we’re on this wiener theme here) of the Los Angeles food truck scene, The Greasy Wiener.

The Greasy Wiener, owned by New Jersey born- native, Adam Dragotta has been on the streets of Los Angeles since March of 2010 with a consistent growing fan base.  Now if the name of the truck doesn’t tantalize your taste buds, here are some things that you should know about the great, yellow wiener mobile that will wake up your palate during this celebratory month.

The Greasy Wiener is a registered trademark and also an original family recipe that includes their own handmade, all beef hot dogs. What does this mean? This means that each wiener has been prepared with no fillers, no steroids and no hormones. While there are no claims to being the healthiest meal on the planet (it is a hot dog after all!), nobody on the streets of L.A. (including your favorite cart lady serving up those ‘danger dogs ‘outside the club or bar you’re stumbling out of at 2am) has a hot dog that tastes quite like this one.

The menu is inspired by Adam’s upbringing in New Jersey with a long history of eating and working in several  fast food establishments.  All their wieners and sausages (yes even the soy based veggie one- “The Hippie”) are deep fried to a perfect snap, some refer to that as “ripper” but we’ll still call it a Greasy Wiener.

Signature item and fan favorite “The Bomb” is a bacon wrapped wiener topped with housemade chili and cheese, mustard, grilled onions and a dill pickle spear-this dog was an award winning standout at the OC County Fair in 2011 for both originality and taste, beating their competition Pink’s Hot Dog’s (the legendary Hollywood stand).

You can also find some New Jersey humor in the menu with a new item called “Brat Jovi” which is a housemade bratwurst infused with cheddar named after one of New Jersey’s hometown rock band, Bon Jovi.  You see there is a bit of cheekiness that  is all part of the experience which you will appreciate  when eating a greasy wiener.

Another favorite is the Chicken Apple Sausage which is made like all the other sausages and wieners on their truck –  hand twisted, steamed and smoked on beech wood and hickory chips, giving a great smokiness flavor to all of The Greasy Wiener  sausages and wieners. All the spices in the sausages and wieners come from Germany and are separated from any allergens (health conscious!).  Ask for “How Ya Doin” (be prepared to use your best accent when ordering) if Chicken Apple is what you crave – a juicy sausage wrapped in bacon, topped with bbq sauce and grilled onions.

Not in the mood for a hot dog? You can also try their White Castle inspired sliders called “Iggys”. What’s an Iggy you say?  Fresh from the butcher, Angus beef mini burgers that are topped with mustard, onions, pickles and added their own “special sauce” on top of some soft and sweet King’s Hawaiian Rolls.

However, let’s stay on topic, now that we’re viciously hungry. Want to know where you can find The Greasy Wiener and try one of these unique dogs? The truck is one of the few So Cal mobile food units that have a Los Angeles, Orange, Ventura County (and soon to be )San Bernardino license, so there is a strong chance The Wiener will be in your home town any given day of the week.

When looking for them out on the streets, you know the drill:

If you catch this article before this weekend, find them at Renegade Craft Fair July 20- July 21, 2013  at Historic Park in Downtown Los Angeles, it’ s free to attend, you can shop locally and eat some wieners! Double win!

Make use of this article mention you read about The Greasy Wiener here and get a $1.00 off any order now through the end of July.  Save a buck, grab a wiener and let’s keep those statistics up for Los Angeles, celebrate “National Hot Dog Month” today!